This event, part of the Larkin100 Celebrations of the poet’s centenary, looks at Philip Larkin’s life in our city from 1950-1955. Within those five years, Larkin found his poetic voice and much of what became his breakthrough collection The Less Deceived was written in his accommodation on Elmwood Avenue.

Belfast International Arts Festival are delighted to confirm that prestigious NI poets, Leontia Flynn and Stephen Sexton will be joining the line-up for what’s set to be a special evening! 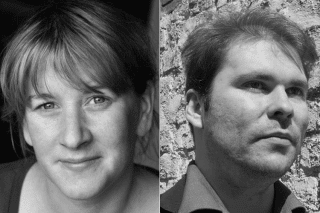 In the first half of the event, Philip Pullen, Chair of the Larkin100 Committee will bring to light the poet’s life in Belfast, and in the second half, Leontia and Stephen will join Hugh Odling-Smee in responding to Larkin’s work, exploring the legacy that Larkin left for poets and readers long after his death.

Leontia Flynn was born in County Down in 1974, and completed a Ph.D. at Queen’s University, Belfast. In 2001 she won an Eric Gregory Award. Her first collection, These Days (2004), won the Forward Poetry Prize (Best First Collection of the Year) in 2004, and was shortlisted for the Whitbread Poetry Award.  In the same year, she was named as one of the Poetry Book Society’s ‘Next Generation’ poets. Leontia Flynn lives in Ireland and is Research Fellow at the Seamus Heaney Centre for Poetry. Three further collections of poetry have been published: Drives (2008); Profit and Loss (2011), a Poetry Book Society Choice; and The Radio (2017). Profit and Loss and The Radio were both shortlisted for the T. S. Eliot Prize.

Stephen Sexton lives in Belfast. His poems have appeared in Granta, POETRY, and Best British Poetry 2015. His pamphlet, Oils, was the Poetry Book Society’s Winter Pamphlet Choice and he was the winner of the 2016 National Poetry Competition. 2019 saw the publication of Sexton’s first full-length, If All the World and Love Were Young (Penguin). A highly acclaimed collection, it won the Forward Prize for Best First Collection, the E. M. Forster Award, and the Rooney Prize for Irish Literature, and was shortlisted for both the Dylan Thomas Prize and the John Pollard Poetry Prize. Stephen’s second collection, Cheryl’s Destinies, was published in 2021 and was shortlisted for Forward Prize for Best Collection and was a Financial Times, Irish Times and Telegraph Book of the Year.